This past Spring, I pretty casually decided to sign up for a half-marathon (if you read this post you know that didn’t turn out exactly as planned…)  I didn’t have any particular race in mind, so I took a look at all the upcoming halfs in Michigan to see if any stood out to me.

Ever since I’ve moved to Michigan, I’ve been hearing how beautiful northern Michigan is, and how I needed to go visit some of the northern resort towns on Lake Michigan and Lake Superior.  So, when I saw that there was a half-marathon planned during the Cherry Festival in Traverse City, I was sold!

For those of you who are unfamiliar, Traverse City is a small city located in the Grand Traverse Bay of Lake Michigan, in the northwest portion of Michigan.  Although it’s small, there’s a LOT to do, and it’s starting to receive more national attention as a great place to live or visit.  It’s been named in the top 25 Small US Cities to Spend a Weekend, a Best American City for Beer Vacations, and a top US Beach Town.

It was about a 3.5 hour drive to Traverse City from Ann Arbor, and I made the drive on a Friday afternoon.  I made sure I downloaded plenty of podcasts before I took off – a long drive is the perfect time to learn a little bit more about politics, history, art, whatever it may be.  I would definitely recommend the new podcast called “Revisionist History”, which goes back and re-examines things that have happened in the past, with a fresh lens.  This episode in particular was eye-opening and important.

I stayed in an adorable bed and breakfast about 30 minutes outside of Traverse City.  I (unsurprisingly) chose it because the breakfast got rave reviews. Denise made one of the best Egg’s Benedict I’ve ever had, and this insane mango/neufchatel stuffed brioche french toast. 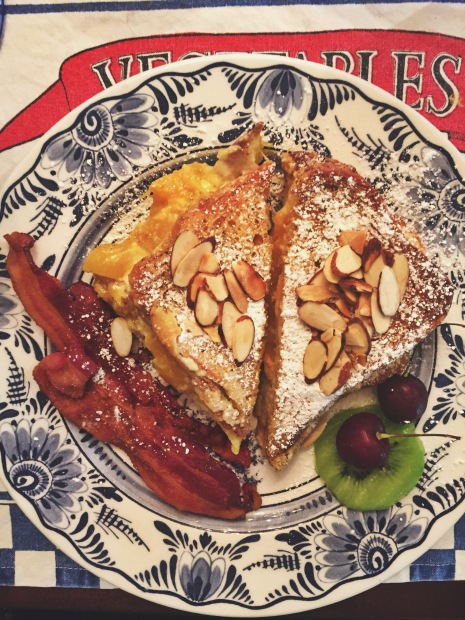 On Friday night, I stayed in and rested up for my big race in the morning.

On Saturday morning I was up by 5:15 AM and headed into Traverse City to pick up my race packet.  I actually can’t remember the last time I was up this early, and not gonna lie, it was painful.

However, the (10k) race was amazing.  While I’m training, I listen to loud EDM music, but when I’m in a race it’s a different story. The collective energy and support of all of my fellow runners is more than enough to keep me going. There were of course tough bits, but I felt very strong for most of the race.  I sprinted to the finish and was greeted by SO much free food! Tons of cherries (of course) as well as cookies, bananas, coffee, yogurt, etc.  I love this part of races.

After my race I showered and headed to the small coastal town of Glen Arbor, which is on the Leelanau Peninsula.  It was literally adorable.  My guiltiest pleasure food is hot dogs (I don’t even care what’s in them), and there was a cash only hot-dog stand calling my name right on main street.  I mean, what says “quaint” more than “cash-only” these days? 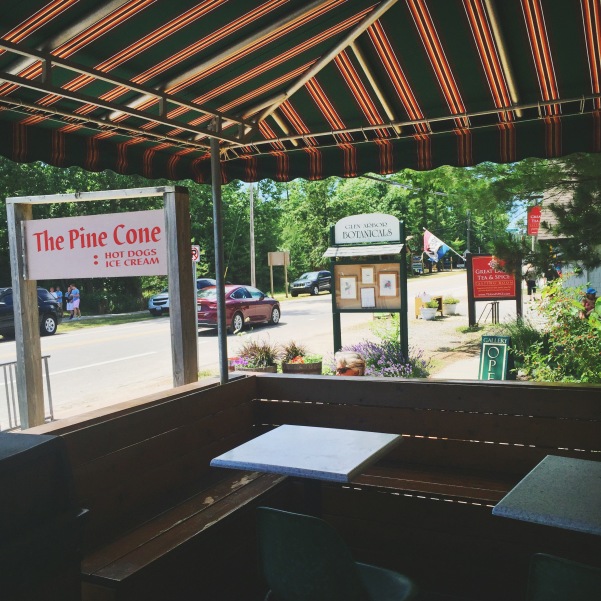 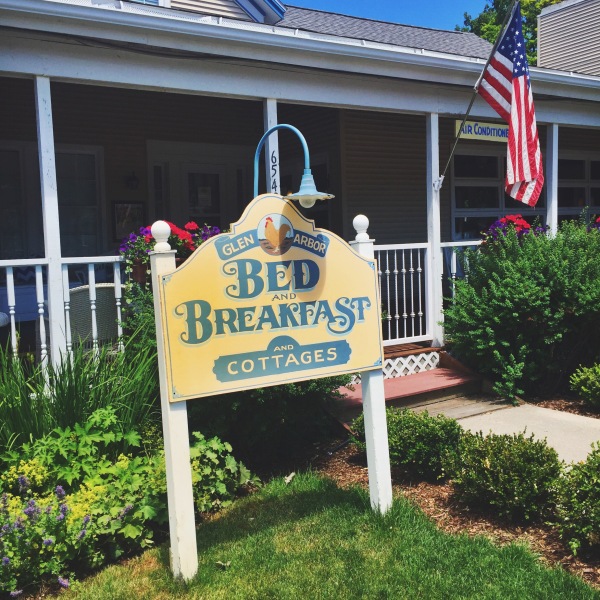 I did a little shopping in the tiny boutiques lining the main (and basically only) street in town, and found a great local coffee shop.  The picture below 100% does not do it justice, but the almond croissant I inhaled at Leelanau Coffee Roasting Co. was hands down the best croissant I’ve ever had.  My mouth is watering just thinking of it! 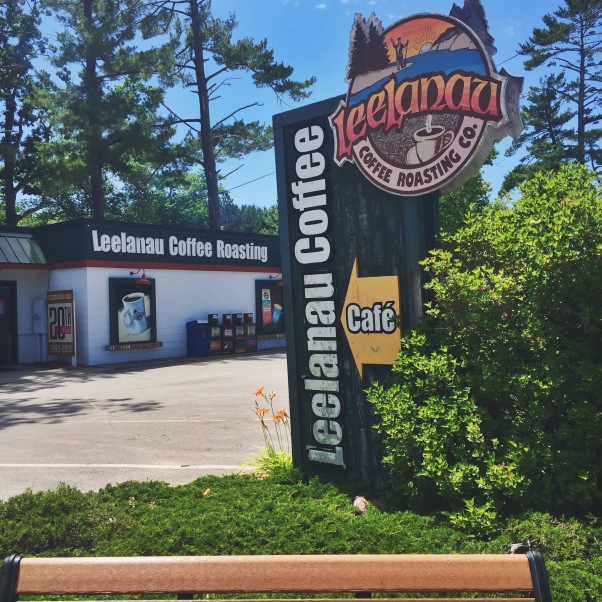 Next, I headed to the beautiful Sleeping Bear Dunes National Lakeshore.  It’s hard to believe a place like this exists in Michigan.  Miles and miles of these majestic sand dunes have formed on the shores of Lake Michigan over millions of years, creating a beautiful and surprising landscape.  Reading on one of the beautiful beaches of the National Lakeshore was the most peaceful I’ve felt in a while.  I can still feel the heat of the sun on my back and the sand in my toes. 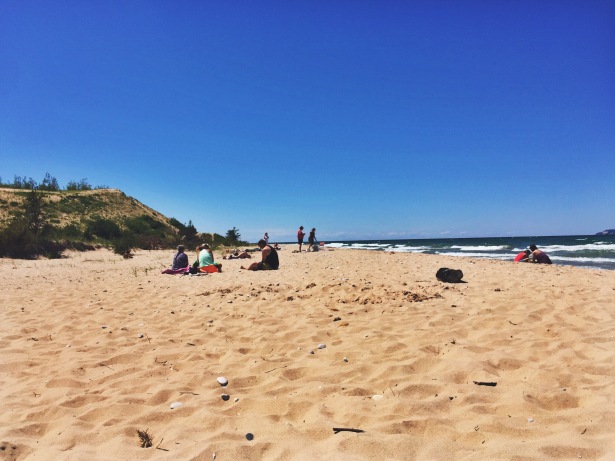 Later I went for a short hike over the dunes.  The views were incredible and require little explanation.

After exploring the dunes for most of the day, I headed back into Traverse City.  The cherry festival was still going on full swing.  There was a carnival, concerts, and thousands of beach goers enjoying the gorgeous day.

Downtown Traverse City is a shopping and foodie paradise.  So many boutiques with local products ranging from clothing to art, books, jewelry, jam, beer, and wine.

A local friend had recommended that I visit a taproom called 7 Monks, and my tired legs agreed that sitting down for a beer was the next order of business.At first, I felt extremely self-conscious.  In my 24 years of life, I don’t know if I’ve ever gone into a bar for a drink and food all alone.  And if I am alone, I need to look busy and distracted on my phone, like I might have something important going on.  How crazy is that!?  I don’t think it’s just me, though.  In today’s world, we crave constant entertainment and distraction.  It’s strange to simply be present, without thinking about what’s next or how we are being perceived.

I’ve learned this lesson over and over, but when I do allow myself to be open to the world and new experience good things happen.
I struck up a conversation with a stranger at the bar, who turned out to be a local.  We hit it off and had a few beers together, talking about our lives, our passions – everything!  We had a few crazy good local beers, then headed to another bar: Workshop.  This place is at the top of my list of favorite bars.  It was in a converted warehouse, and a band was playing.  It had a very industrial feel; an entire wall was open to a patio complete with cornhole (fave game) and a BBQ pit.  I got a hotdog 🙂 Duh.

At around 10 pm, my early morning finally caught up with me. I had to say goodbye to my new friend and a fantastic town.  We exchanged numbers, and I promised that when he visited Ann Arbor, I’d return the favor and show him around.

It was a short trip, but I felt renewed in spirit despite my tired legs. Travel opens your eyes and heart, even if your brain is saying “This feels uncomfortable!”  Ignore that little voice every once in a while.

View all posts by mayapeters 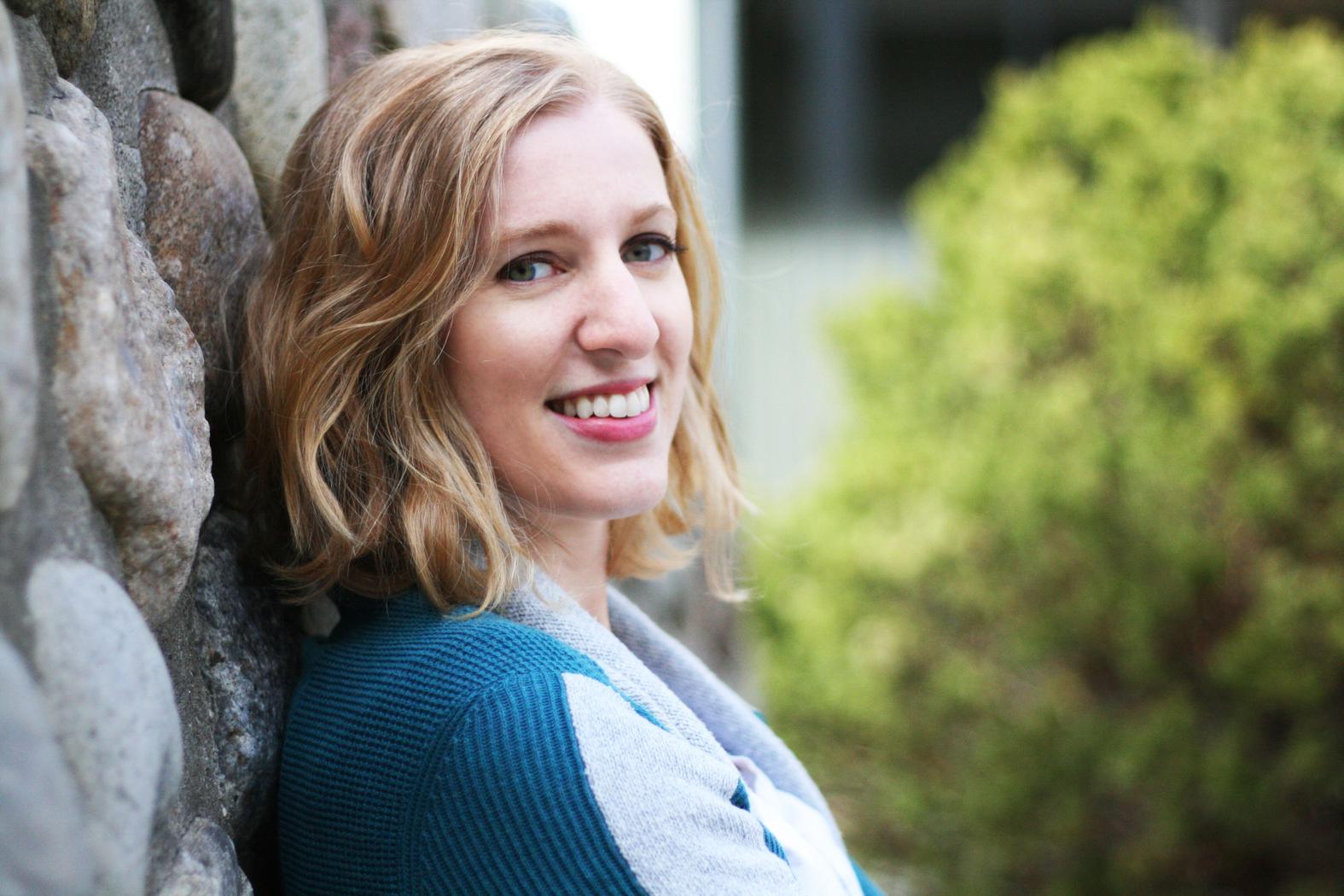